A lightning strike on 7 January 2015 led to a bushfire that destroyed 80% of Black Hill Reserve, covering an area of 260 acres, and affecting 19 neighbouring properties. The fire caused significant damage both to the natural environment and the park infrastructure, including 70% of the boundary fencing, the destruction of 80 nest boxes and many thousands of previously planted trees.

The reserve is a valued conservation and recreational bushland near Kyneton popular with local residents, bushwalkers, rock climbers, bird watchers and picnickers for its varied wild flowers, birds, animals and rock formations. The loss was heartbreaking for the volunteers who had put so much work into the reserve.

Led by the Macendon Shire Ranges Council, a collective of community groups including Friends of Black Hill Reserve, Loddon Prison Landmate program, Upper Campaspe Landcare network, and members of the local CFA, set about rehabilitating the reserve so it could be reopened once again.

The team involved in the reserves rehabilitation replaced 15 kilometres of path, 7 kilometres of fences, and replaced 80 nest boxes, as well as replanting native plants and implementing erosion control measures.   Included in the rehabilitation process was the creation of a commemorative sculpture that symbolised the intense sense of loss caused by the destruction of the reserve by the fire.

In February 2014, almost 23,000 hectares was burnt in the Mickleham-Kilmore fires. The fires had a significant personal and economic impact on local landholders, with 40 houses, 16,000 livestock, 1,700 kilometres of fencing destroyed as well as hay and pasture losses. The economic value of these losses was estimated at $19 million dollars.

The thirst for knowledge about the fire recovery process among landholders was huge after the fires. Landholders wanted to know what to do, as well as how and when to do it, and what they could expect or should look out for through the recovery process. Landcare responded, providing much needed public education by organising 16 workshops, field days and courses on a variety of fire recovery topics, including soil care, protecting waterways and farm water, managing livestock after fire, pasture recovery, and bushland recovery. A wide range of partners assisted at the events, including DELWP, Melbourne Water and Catchment Management Authorities, which were attended by almost 500 people.

The project was a success due to experience from the 2009 fires, the collaboration between Landcare groups and the inclusion of multiple partners.

After the 2014 Mickleham/Kilmore bushfires the South West Goulburn Landcare Network set out to assist the local community who had been affected by the fires along the path to recovery.

The idea for this project grew from the extensive knowledge and involvement of the Landcare Network in the 2009 Black Saturday recovery efforts. This lived experience provided understanding and experience necessary to guide actions in this process and to recognize the importance of timely and coordinated responses that were both professional and caring for those affected. Their recovery initiative was a concept that was able to provide support to both the emotional and physical impacts suffered by the community.

Local networks and local knowledge are critical to community recovery. South West Goulburn Landcare network made direct contact with all of the 142 affected landholders to assess how they had been affected, how and where they needed assistance and identified the priority of measures needed. This immediate response led to a response from 40% of landholders .

To help those affected to benefit through participation the Network worked with Upper Maribyrnong Landcare Networks to run joint workshops which provided information on water quality protection, stock health and management, weed identification, soil testing, land erosion and other topics.

SWGLN has developed a number of templates and information to provide a quick and effective response to fire which the network has built upon after the two recent bushfires affecting the area. These have been shared with other Landcare networks to assist them with recovery after fire. In addition, the South West Goulburn Landcare Network, aided by over 300 volunteers, provided assistance to landholders with the replacement of burnt fencing, stream protection, weed control, replacement of nesting boxes, erosion control, and water quality management.

One of the most positive outcomes has been the community engagement between the numerous service providers and the general community. 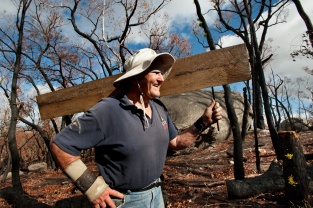 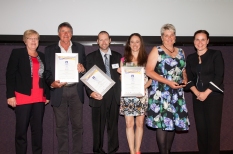